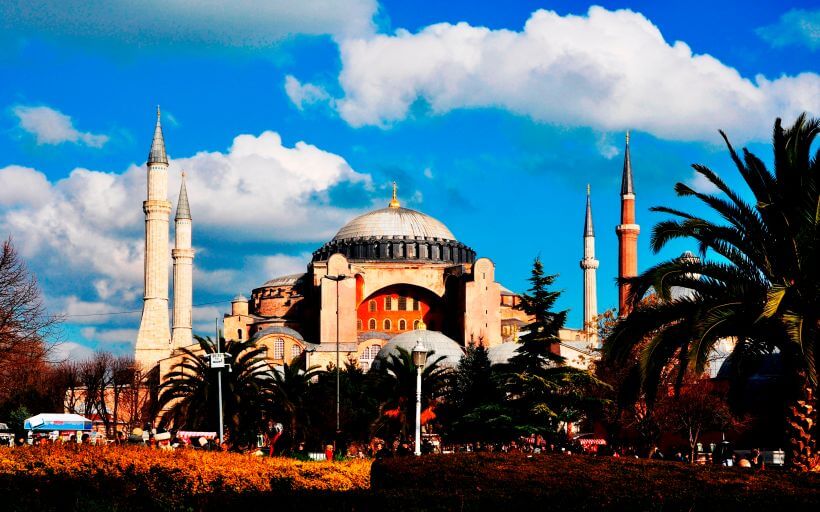 by SV Hotel, 12/11/2015
Meaning ‘The Church of the Divine Wisdom’, the magnificent Hagia Sophia is one of the most visited museums and most prominent monuments in the world in terms of art and the history of architecture. Called “the eighth wonder of the world” by East Roman Philon at the 6th century, The Hagia Sophia was constructed three different times on the same spot and carries the title of being the largest Byzantine Church built in Istanbul.

The first church, the Megale Ekklesia (Big Church), was built by Emperor Constantine in 360 C.E and was severely damaged in a rebellion in 404 C.E.

In 415 C.E. The Emperor Theodosius II had a new church built and this church was burnt to the ground due to another rebellion in 532 C.E.

Today’s Hagia Sophia was built by the Emperor Justinian, who assigned the two important architects of his period – Isodoros and Anthemios – to complete the project. Construction of the church began in 532 C.E. and opened with a grand ceremony in 537 C.E.

Under the order of Atatürk and the decision of the Council of Ministers, Hagia Sophia was converted into a museum in 1935.

One of the greatest surviving examples of Byzantine architecture, this eye-catching magnificient architectural masterpiece holds a fascinating collection of religious icons, stone work, mosaics and funerary art. Its interior is decorated with mosaics, marble pillars and coverings of great artistic and historical value. It’s well known that Justinian shouted out, “Solomon, I have outdone thee!” in the completion of the temple.

The vast interior has a complex structure. The nave is covered by a central dome which at its maximum is 55.6 m from floor level and rests on an arcade of 40 arched windows. Repairs made over time to the dome’s structure, have left elliptical, with the diameter varying between 31.24 m and 30.86 m.

Interiors are decorated by marbles, green and white with purple porphyry and gold mosaics. The mosaics either depicted the Virgin Mother, Jesus, Saints, or Emperors and Empresses.

At the northwest of the building there is a column with a hole in the middle covered by bronze plates. It is called the perspiring column, the wishing column, the sweating column or the crying column, it is said to have supernatural powers and dampens when touched.