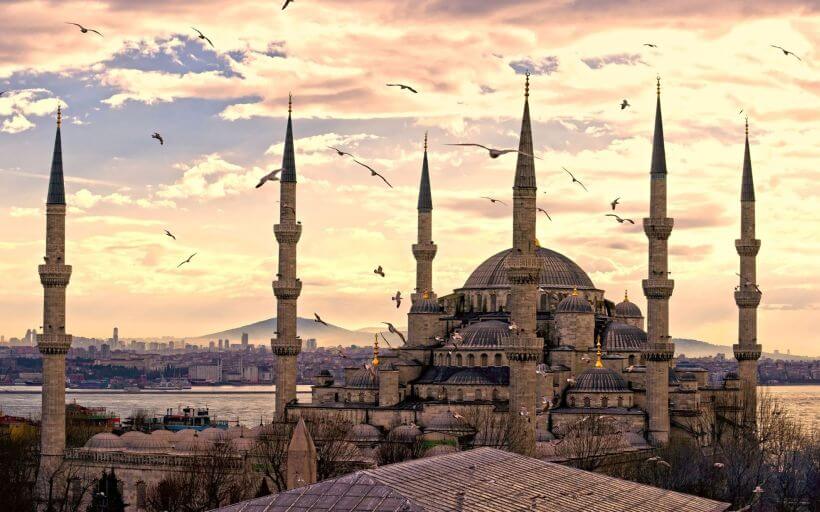 Located on the Historical Peninsula, in the district to which it gives its name, The Sultanahmet Mosque is considered to be the last great mosque of the classical period.

The mosque was built on the site of the palace of the Byzantine emperors, facing the Hagia Sophia and the Hippodrome. One of the great examples of classical Ottoman and Islamic architecture, the mosque’s architect is Sedefkar Mehmet Ağa, pupil of the famous Imperial Architect Mimar Sinan.

The mosque complex was the largest project yet undertaken in the city at its period. In addition to the mosque itself, there were madrassas, a shopping district, baths, public fountains, a hospital, a primary school, an alms house and rooms for rent. However only some of these survived to this day.

The mosque’s interior is decorated with 20,000 blue, green and white handmade ceramic Iznik tiles. Iznik, which is called Nicea in ancient times is a town in western Anatolia and famous for its production of these unique and beautiful tiles. The tiles at lower levels are traditional in design, while at gallery level their design becomes eye catching with flowers, fruit and cypress patterns.

The upper levels of the mosque interior is dominated by blue paint. More than 200 stained glass windows provide the mosque a natural light. For these reasons the Sultanahmet Mosque is known as the Blue Mosque in English.

The Sultan Ahmed Mosque is first one of the two mosques in Turkey that has six minarets. When the number of minarets was revealed, Sultan Ahmed I was criticized for being presumptuous, because this was the same minarets number as at the mosque of the Ka’aba in Mecca. Ahmed I, overcame this problem by ordering a seventh minaret to be built at the Mecca mosque.

The Sultanahmet Mosque became the principal mosque in Istanbul after the Hagia Sophia was converted to a museum in 1934.

To best appreciate the mosque’s design, enter the complex via the Hippodrome rather than from Sultanahmet Park. Once inside the courtyard, which is the same size as the mosque’s interior, you’ll be fascinated by the building’s perfect proportions.

The tomb of Ahmed I, the Blue Mosque’s originator, is in a separate building on the north side facing Sultanahmet Park. Ahmet I, ascended to the imperial throne at the age of 13 and died one year after the mosque was constructed, aged only 27.