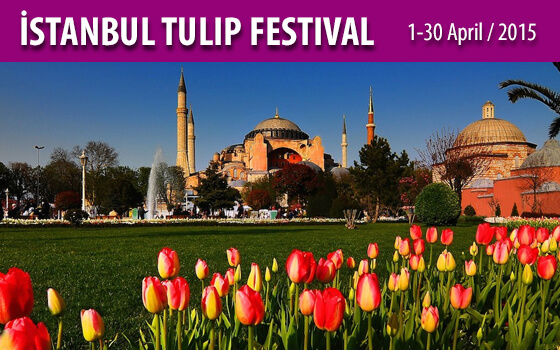 by SV Hotel, 11/04/2015
The tulips begin to bloom around the end of March or beginning of April, depending on the weather. They bloom for several weeks and may delight the eye and the spirit for nearly a month.

Tulips & Blue Mosque, Istanbul, Turkey
Sultanahmet (Blue) Mosque in tulip time.
April may not be as rain-free as May or June, but it usually has moderate temperatures. It’s a great time to visit Istanbul!

The tulip is one of Istanbul’s traditional symbols. Brought to the city from Iran centuries ago, it was favored and cultivated here until tulip-love became a mania. In the so-called Tulip Period of Ottoman history, a rare tulip variety could be sold for a breathtaking sum.

Come to Istanbul in April and enjoy the Tulip Festival, not to mention the thousand other things that make this city, for me, the most fascinating on earth.